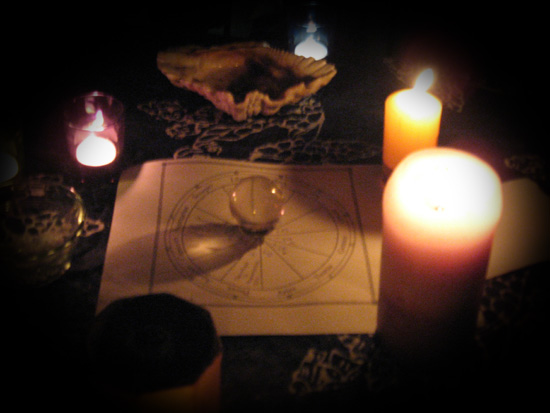 Talisman for the Inner Realm Of Ynys Witrin, the Dark Moon Circle of Spheres Of Light

The Talisman is an object marked with magic signs or symbols which by the nature of its vibration, energy and intent brings about a change in circumstances. Talismans are usually objects or inscriptions of great power and positive energy which is duly passed to its possessor. The Talisman contains symbols & sigils that represent beliefs, perceptions, and concepts formed in the human mind but engineered by universal & cosmic laws. A mystical symbol is therefore a thought form of the cosmic law itself. Mystical symbols have been used for hundreds if not thousands of years and have energy, they have a specific vibration, and they remain forever intact because they are based on incorruptible laws of the universe.

A sigil is a symbol created for a specific magical purpose. A sigil is usually made up of a complex combination of specific symbols or geometric figures each with a specific meaning or intent. The sigil can be as a simple process of combining key letters of the alphabet or can be a combination of ancient symbols and sacred geometry. The sigil can be a stand alone power icon or can be incorporated in a Talisman or amulet to add power and intent.

The term sigil derives from the Latin sigilum meaning “seal,” though it may also be related to the Hebrew segulah (meaning “word, action or item of spiritual effect”). A sigil may have an abstract, pictorial or semi-abstract form. It may appear in any medium — physical, virtual, or mental. Visual symbols are the most popular form, but the use of aural and tactile symbols in magic is not unheard of.

Sigil magic is a common form of magical work among practitioners; symbols and signs have always been a tool of magicians and alchemists. In modern uses, the concept was mostly popularised by Austin Osman Spare, who published a method by which the words of a statement of intent are reduced into an abstract design; the sigil is then charged with the will of the creator.

Sigils have many potential uses. Spiritual protection is a common one; as well it can be used during healing and magical work. It can also be used to accomplish a desired end, such as writing down a result in symbolic form, and then burning it. A sigil can even be created as a personal glyph for an individual magician.

In a post-modern context, businesses may use logos as their sigils and invest them with a comparable degree of prestige or power. The idea that these symbols are consciously used as magical tools is a popular idea among some occultists.

The pentacle is the most powerful sigil used in Neo-pagan witchcraft and by many occultists. Individuals can adopt their personal sigils by selecting a letter from the rune or Theban alphabets. They have personal, secret meaning and are often inscribed on magical tools used in occult practices and ceremonies. Sigils also serve as amulets, talismans, or meditation tools.

Sigils designs are derived from geometric shapes, astrological signs, or symbols used in alchemy. They may be of various signs, such as crosses, associated with different deities. Some of the best sigils are attained through intuition and inspiration. Many come through meditation and the practice of scrying; when a certain pattern seems to appear upon the object which the individual is gazing at.

There are several types of sigils. Word sigils are the most common and are made by taking a statement of your intention and reducing it to key letters. Those letters are then combined to make a symbol to be used in magic, charms or ritual.

The best way to create sigils is just to play around, like a child in art class. These are specific symbols of power for you; no one else needs to be able to recognize your intentions for these symbols so don’t worry about perfection. There is no right or wrong system. As with all magic the most important ingredient is intent.

Magic squares can also be incorporated into your Talisman or can be used separately for protection or for healing or creating wealth. During ancient times in China, India and Arabia magic squares were used in practices of occult, magic and astrology. They have been and still are worn as amulets for protection.

In present times some mathematicians have discovered mathematical properties in the magical squares, especially those of larger configurations. Magic squares work by utilizing a number or letter, supposedly having magical properties, is assigned to a square, the squares are divided into parts with each part becoming a square within the larger square and when read horizontally, vertically or diagonally the same sums or words are produced.

The Sator Square is an ancient charm of great power and mystery. The earliest example was discovered scratched on a wall in the buried city of Pompeii and dated back to the first century AD. Although used by early Christian Mystics as a magical charm the square has surfaced in cultures and religions all over the world. The square was originally thought to be of Christian design, because of the hidden anagram Pater Noster, but there is now strong evidence that it predates Christianity and refers to the ancient God, Mithras. The Sator Square has numerous magical properties and is a powerful charm to protect the bearer from evil as well as bring strength and power.

Versions of the Sator Square also are found in other Roman archaeological sites, notably a third-century inscription at the military barracks of Dura-Europos (in modern-day Syria) as well as other examples in Britain and Hungary.

Medieval European culture preserved the formula in magical grimoires as a powerful written cipher and all-purpose protective charm. It was employed to keep women safe in childbirth, for protection of buildings against fire, and for the cure of insanity or fever. The most famous artistic reference to the Sator square occurs in an Albrecht Durer etching of “melancholia.” In the nineteenth century, the Pennsylvania Dutch used the Sator Square to protect cattle from bewitchment. 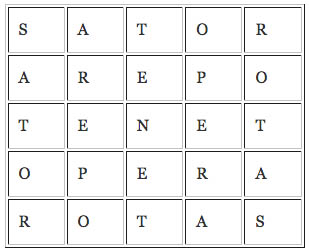 As you can see, the magic square reads the same way in all directions: Sator Arepo Tenet Opera Rotas. The words are Latin, and literally they translate as “The Sower Arepo holds the wheels with care.” However, the form of the magic square is far more important than its meaning, and there is no scholarly consensus about the precise significance of the words, if any. The very ambiguity of the words, and the power of the palindrome form, historically has allowed the magic square to be appropriated to many different ends.

One must always be aware that when constructing components for magical purposes, the creator of such a magical object whether it be a Talisman, Amulet or a spell carries the burden of responsibility and the intent of the magic should be used with clear motives.