** AEST, add one hour for Daylight Savings Time. Exact dates and times are from www.archaeoastronomy.com/2022.html – Equinox and Solstice data from the U.S. Naval Observatory, Washington DC. Cross-Quarter moments are interpolated as the midway points between the Solstices and Equinoxes measured in degrees along the ecliptic. Former NASA scientist Rollin Gillespie uses this spatial method rather than simply splitting in half the time interval between a Solstice and an Equinox.) 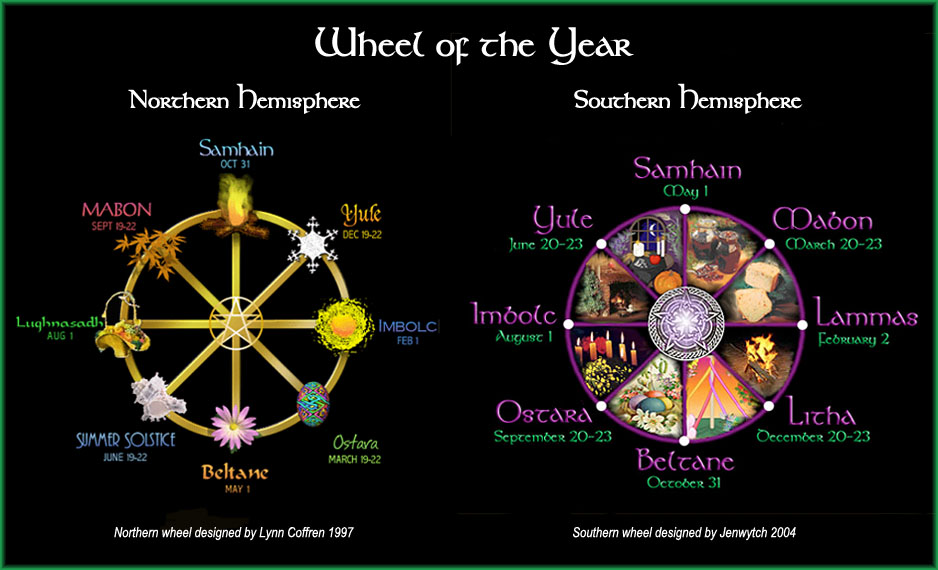 The Wheel of the Year

The Wheel of the Year is a Pagan metaphor and calendar for the cycle of the seasons. It consists of eight festivals, known as sabbats, spaced at approximately even intervals throughout the year.

In many forms of Paganism, the passing of time is seen as cyclical, and is represented by a circle or wheel. The progression of birth, life, decline and death, as experienced in human lives, is echoed in the progression of the seasons. Many Pagans also see this cycle as echoing the life, death and rebirth of the God and the fertility of the Goddess.

As the Wheel originates in the Northern Hemisphere, in the Southern Hemisphere most Pagans advance these dates six months so as to coincide with the natural seasons as they occur in their local climates. For instance, an Australian Pagan may celebrate Beltane on the 1st of November, when a Canadian Pagan is celebrating Samhain.

The Pagan Wheel of the Year turns through many significant dates and festivals. The highlights are the eight seasonal Sabbats, and the thirteen Esbats which we celebrate each Full Moon.

The Sabbats are divided into two groups. The Greater Sabbats; Samhain, Imbolc, Beltane and Lammas, fall on dates that represent high energy in the season. The Lesser Sabbats; Yule, Ostara, Litha and Mabon, fall on the equinoxes and solstices, the dates of which vary slightly from year to year, and they mark the changes of the four seasons. The Greater Sabbats are also known as the “cross-quarter” days as they mark the point between the solstice and the equinox.

This seasonal cycle is one of the key ways in which we see the processes of birth, growth, death, and rebirth play themselves out, and the myth of the Wheel of the Year was created to illustrate this cycle.

There are many variations of the myth throughout the different Pagan Traditions but the underlying theme is the same, and the rituals of the Sabbats are derived from this myth. A simplified version is given below:

In midwinter, the Goddess gives birth to a son, the God, who grows to adolescence by spring. In spring, the Goddess appears to the God in a youthful form. She falls pregnant to him and grows in beauty through summer and autumn. Over the same time, the God ages and slowly dies, symbolizing winter. In the darkest time, when the days are at their shortest, the Goddess gives birth to her son, the God, whom she will again take as a lover in spring, continuing the life cycle or spiral.

In this myth the Triple Goddess goes through the changing aspects of Maiden, Mother, and Crone. The God brings forth the force of projective energy, the Spark of Life, and also the withdrawing and destructive energy of Death. The Goddess absorbs, reflects and transforms these energies. The Goddess and God are viewed as immortal and imperishable; they are the Duality of the Divine. Their different aspects are a symbolic shifting of cycles, ones we discover within ourselves, our World and throughout our own lives. This is the process that produces balance; within and without, above and below.

In spite of modern lifestyles and insulation from the natural world, we are still dependent upon the forces of nature, and contemporary Witches observe the Sabbats to establish and maintain a balance with nature. Sabbats are also a time for the Witch to look within, to reassess the life-path taken so far, and to reaffirm the directions she or he wishes to take in the future.

(There are many good books and websites which go into the different versions of the myth, meanings, symbolism and correspondences of the Sabbats in far more detail than they are presented here. This is just a brief overview of some of the main points.)

The Pagan year begins (and ends) with Samhain. It is a time of reflection, of looking back over the last year. This is the time when the boundary is thinnest between the worlds of living and dead; the powers of divination, the Sight, and supernatural communication are strengthened on Samhain night, and it is considered a powerful but dangerous time to communicate with lost loved ones. Pagans celebrate Samhain as an acknowledgment that without death, there can be no rebirth. At Samhain, the darkness increases and the Goddess reigns in her powerful aspect of the Crone. The God passes into the underworld to become reborn of the Goddess again at Yule. It is a time to honour those who have gone before us.

Find out more about Samhain from Wikipedia.

Winter solstice or Yule is the shortest day, and also the longest night of the year. It marks the return of the Sun’s warmth and light, and the promise once again of a productive Earth. Pagans celebrate these aspects with candles, fire, greenery and feasting. At this time, Yule logs are burned. The Yule log must traditionally be the root of a hardwood tree, and in Australia mallee roots are ideal for this purpose, as are Tasmanian oaks and all types of Eucalyptus. The Yule log is burned down until nothing but a small piece remains, which is saved and kept to be used as a lighter for the following year’s Yule fire. A Yule tree is placed within the traditional Wiccan home, with a pentagram (five pointed star) at the top, symbolizing the five elements. Presents are exchanged and many Witches stay up all night to welcome the sun. This is symbolic of the Goddess giving birth to the God and then resting after her ordeal.

Find out more about Yule from Wikipedia.

Imbolc is the time of the beginning of beginnings, the time to consider carefully what you will do with the year stretching before you. Imbolc brings the awakening of the life force when the first green shoots of bulbs appear. Life is stirring again and this marks the Goddess recovering after giving birth while the newborn God is depicted as a small child nursing from his mother. The God is growing, spreading sunshine all around causing things to grow. It is a time to honour the feminine and get ready for spring. At lmbolc, the Australian forests are bright with the colour yellow, the Acacia trees coming into full flower. Until fairly recently, the 1st of August was “Wattle day” in Australia (it has now been moved to the 1st of September).

Find out more about Imbolc from Wikipedia.

The Equinoxes are the balancing points in the cycle of the seasons, when the day and night are of equal length, reminding us of the harmony of the whole. Buds of flowers and leaf, all manner of eggs and just-born life are celebrated in decorations and imagery as Pagans rejoice in the Earth’s reawakening. The urge of spring is to do, create and bring in the new. Here light overcomes darkness with lengthening days bringing the magic of new growth. Ostara is associated with childhood and new life, and the God and Goddess are perceived as children, personifying youth and innocence before their entry into adulthood. The Goddess, as the Maiden, covers the earth with flowers and love while the God grows to maturity. This is a time to honour the masculine and to celebrate everything that is great about being alive.

Find out more about Ostara from Wikipedia.

Beltane, the beginning of the summer months is at the November cross-quarter. This is the festival of the Great Rite – of sexual union between Goddess and God. Beltane is the spring fertility festival and there is feasting and celebration – a great festival for lovers! Beltane is the most popular time for Witches to be handfasted. This is the time when the brilliant red flowers of the Flame Trees highlight Australian forests and gardens.

Find out more about Beltane from Wikipedia.

This is the longest day of the year, and a time of joy and strength for the light. It is a time when the powers of nature are at their fullest. In the past this was often marked with bonfires and celebrants staying awake through the short night. To leap over the bonfire was to assure a good crop; some said the grain would grow as tall as the leapers could jump. Due to fire restrictions in Australia throughout summer, celebrations for this Sabbat tend to be quite different from those throughout the rest of the year. No candles can be lit, no cauldrons burned, and no open flames are allowed outside throughout much of the country. Litha falls in the dry stifling heat of summer in the southern part of our land, but in the north, Litha falls in the hot, wet season, and represents fruitfulness. In Australia the Sturt Desert Pea is a sacred flower of this time. This is a time of ascendancy of the God, at his most powerful now, while the burgeoning Goddess brings forth the bounty of the Earth.

Find out more about Litha from Wikipedia.

Lammas is the “cross-quarter” day marking the first harvest of early grain, where the first loaf of the bread from the harvest is broken and shared in the name of the Goddess. All crops associated with grain and of the season are sacred to this time. It is a time to reflect on the successes of the year and to reward yourself for jobs well done. Lammas magic can be magic of facing up to change. The God gives his energy to the crops to ensure life while the Goddess, as Mother, prepares to transform into her aspect as the Crone. The God loses his strength as the days grow shorter.

Mabon is a balancing point in the light and dark of the year, the day when the sun has equal hours in and out of the sky. It is also the second harvest. At this time food is prepared for storage, jams and pickles are made, and fruits are candied and preserved for the coming winter. Pagans celebrate this as a rite of Thanksgiving, a celebration of harvest abundance, an appreciation of hearth, home, and family. It is a time to reflect on what it means to be a Witch and re-affirm your commitment to the Craft. This is the time when the Goddess is mourning the God even though she carries him within her, to be born again at Yule.

Find out more about Mabon from Wikipedia.