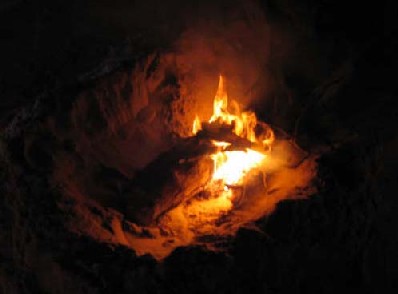 Look out Bundeena, something Wiccan this way comes. Yep, Bundeena that sleepy seaside hamlet to the south of Sydney was the focus of our 2005 Yule solstice celebrations over the weekend of 25 – 26 June. Better late than never.

We arrived on the Saturday morning to cold, bleak conditions. Rain, wind, more rain and colder than a witches tit. Hmmm, we were planning an outdoor ritual by the sea but it seemed as if the elements and those rascally dragons weren’t having a bar of it. Come to think of it, they were simply giving us what we’d asked for in ritual a fortnight ago … lots of prolonged gentle rain. Hey, be careful what you ask for as you may just get it. And we got it.

Never the less, nothing could dampen our spirits and it was all fun, fun, fun in the non existent Sun from the moment we all met up. Six gals and two guys. One big happy Circle.

Saturday was spent settling in and having more than a few laughs as our Circle is inclined to do. Good old Aussie fun. As always, food was a key feature as it is in any gathering we have. It was more like being at a caterers’ convention at times with enough food to feed a small African nation on offer. We had it all from caviar to cabanossi and not a vegetarian in sight.

In the afternoon, after a lunch that had the table legs groaning, we went for a walk in between rainstorms to recon places for likely ritual sites. Yes, we were still hopeful of an outdoor ritual despite incessant rain falls and chilly winds. Damn !! Every likely site we wanted would either be too open to curious muggle eyes or under 20 foot of water at high tide. Most frustrating I must say.

We retired back to the bungalow still wondering what we were going to do. If need be we could celebrate Yule in the backyard or at worst, indoors using the cauldron and a small votive Yule log or Yule stick, whatever. It certainly didn’t bode well for the great outdoors and it looked like our Yule log wouldn’t be burnt this year.

Regardless, early evening and in high spirits we were off to the local Rissole for a forgettable dinner and a juke box war with the locals. It was Heather’s selection of Abba favourites versus the locals’ AC/DC genre of music. The locals withdrew under the relentless onslaught of “Fernando” and God knows what else she put on. The woman is relentless and takes no prisoners. She can be such a witch at times.

Outside again and lo and behold the dragons and attendant elementals had put their feet up and taken a well deserved smoko. The skies were clear and dusted with a myriad of stars. The Southern Cross looked down on us as eight pagan smiles lit the night. It was on.

After earlier indecisions, a ritual site was selected in the eastern corner of the beach, a short walk from our bungalow. The sand was hard packed and miraculously fairly dry. We quickly gathered our ritual items from the bungalow including the Yule log.

With a struggle, I lugged the Yule log to the beach, smiling at the thought that I felt like some latter day Christ carrying his Cross but surely under more pleasant circumstances.

We chose a perfect spot. A fire pit was dug and the Yule fire was lit. Our pine Yule log blazed in all its glory. The quarters were called and the ritual began. And what a ritual. Janine had outdone herself with a startlingly beautiful production (no other words to describe it). It was all perfect. The words were divine and everyone spoke their parts with feeling and power. The Old God departed and the Young God gave his blessings to the Circle. In turn, each one of us stated aloud wishes we desired to come true for the new season or simply gave thanks for things that had occurred in the past season. Energy was raised and directed into the Yule fire with chanted words using elemental forces. Residual energy was then directed to those in need of healing such as friends and family to the Earth and its plants and animals.

The Circle was closed and it was time to relax and count our blessings. The Gods had looked down on us and blessed us with this small window of opportunity. They gave us a perfectly, beautiful, mild night to honour them and the Yule solstice. It was so nice that we decided to sit around the Yule fire and enjoy the night and each others company. And of course, as every happy camper does when sitting around a campfire, in the dead of night, ghost stories were told. Fortunately, all being adults, we didn’t get scared although my Scot ancestry did have me looking over my shoulder into the shadows. Brrrrr … ghosties.

As we sat there the wind picked up and the weather finally closed in again from starry cloudless sky to brooding storm. The dragons were back and telling us to git. So we did. Heather left apples for the possums and wallabies as we walked amongst the trees. She may be a juke box terrorist but she has a heart of pure gold.

Back in the bungalow and our Yule celebrations kicked in. It was a big night for all, drinkers and non drinkers alike. It was laugh, laugh, laugh with the odd tarot reading thrown in to keep at least some resemblance of spirituality attendant during celebrations. Yep spirit communication was a theme embraced by many on the night. Janine should be crowned Miss Mead 2005 whilst others gave homage to Baccus. As the bottles reached their low tide marks the stories got wilder and wilder. The girls never let up. I’m sure at times it was a competition to see who could out gross each other the worst. And they did a pretty good job of it. It was like being out with the blokes to tell the truth but without the aggression. Hey, what a brilliant night. A word of warning, if ya easily offended and don’t have a wicked sense of humour, ya wouldn’t survive our Circle. Hmmm … maybe that should’ve been a Wiccan sense of humour. Oh well, whatever.

Sunday morning was viewed through bleary eyes as the smell of a mountain of bacon, eggs, toast and tomatoes wafted through the house. Everyone was famished and once again Heather had been the perfect ‘provedore’ knowing just what was needed for various bellies in need. And a big thanks to Rex for the muesli, it was certainly delish with lashings of fresh fruit and yoghurt piled onto it.

Alas, the day was still crook with incessant rain. Will our walk to the aboriginal carvings still go ahead? Yep, once again a window of respite from the rain was presented to us. Off we went on our search for the carvings. No one had seen them before and the only map we had was from the Gregory’s street directory. Well what the heck, Cook probably had less idea than we did of where he was going and he did alright for himself.

Seeing myself as Jungle Jim, I led the way through the bush. I must say, being senior male and having camped on Jibbon Head 43 years ago (as a ten year old !!) who else would they have lead them. What a beautiful walk. The weather had cleared again. The water was warm enough to wade in. The bush smelt alive as it always does after rainfall. Thousands of banksia flowers stood like luminescent orange candles throughout the bush giving it plenty of welcome colour.

Up and down we weaved through the bush. On and on we trekked until it became evident that Jungle Jim had led the group straight past the carvings and was on track to reach the outer suburbs of Wollongong at any moment. Thank the Gods Rex was able to get us back on the right track and we finally found the carvings.

A large open rock shelf spread out before us. Images of whales, fish, frogs, kangaroos and stingrays were carved into the rock surface many thousands of years ago. We could feel that it is indeed a very special place.

After a short discussion it was deemed ok to hold a meditation at the site. We are quite aware of the delicacy required if one does choose to communicate with spirits that are not necessarily of our ancestral backgrounds. Aboriginal sacred sites must never be approached in a reckless manner and mostly should be left alone. A small branch of eucalyptus leaves was held as a token to assure the spiritual guardians of the site that we had come in peace.

We meditated in the warm Sun and were rewarded by the appearance of two aboriginal spirit guides that gave us an insight into what it was like for them before the white man came to the land. Women and children gathered the bounties of the earth and sea and life was ideal for the local peoples. We were again blessed by being accepted by the spirits of this sacred place. We thanked them and left the site in peace.

The weather closed in again just as we arrived back at our haven. A pleasant closing afternoon was spent with Alana and a friend treating the group to Hawaiian massages. Thanks Alana and Rebecca.

And so a memorable Yule weekend came to a close. I thank Janine, Heather, Candy, Georgie, Jenny, Alana and Rex for making this a wonderful spiritual weekend retreat for all in attendance. Ya wouldn’t be dead for quids. Blessed Be to all.

An Aquarian Tale
Through the Mists of Avalon